The new partnership was presented during Trek-Segafredo’s annual sponsor summit – a meeting at the team’s December camp in Siracusa, Sicily.

Trek-Segafredo technical director, Matt Shriver said the new-look team was thrilled to have SRAM on board as the official drivetrain partner of both the Trek Segafredo men’s and women’s teams as of 2019.

“SRAM has a pedigree of racing that fits naturally with Trek-Segafredo’s ‘best in class’ product motto,” he said.

“Their SRAM RED eTAP wireless group and hydraulic disc brakes are a step forward for our teams. Their passion for racing shows through their commitment to deliver great service to our athletes. They are open to new ideas and feedback, which is exactly what we need from a drivetrain partner to continue achieving our performance goals in the professional peloton as well as developing products for our Trek customers. It’s exciting to be partnering with SRAM!”

The partnership with Trek-Segafredo is seen as a major move for Chicago based SRAM.

“We’re stoked to support this world-class program,” said SRAM’s Road Sports Manager Jason Phillips. “This team and these riders will represent us at the highest levels at nearly every major road race around the globe. We can’t wait for racing to start in 2019.”

SRAM will be equipping both Trek-Segafredo programs with the SRAM RED eTap drivetrains and HRD hydraulic disc brakes.

The announcement of the SRAM-partnership also marked the launch of the Trek-Segafredo women’s team bike scheme. The new paint incorporates aspects of the women’s kit, and aspects of the new Project One ICON design cues. Expect to see this bike at the front of the peloton starting at the Tour Down Under. 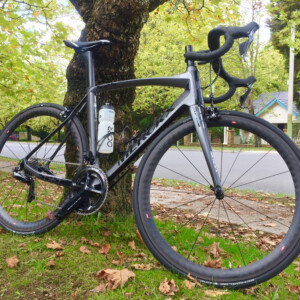