Search
Menu
Search
If you read through the names of the managers and directors of pro teams you will soon recognise the fact that these positions are almost always held by former professional riders. And this is pretty much the way it has always been. As riders retire, they put their knowledge and experience to good use behind the wheel of the team car.
To name a few recent retirees who have made this step, we need look no further than Aussies, Scott Sunderland, Matt White, Brad McGee, Neil Stephens and Allan Peiper who are all extending their involvement in the sport after their racing days are done. The list of roles within the sport goes on and on, and at this year’s Tour de France I became aware of yet another role, which was surprising in its specificity.
At the finish area of stage three into La Grande Motte, I was wandering around behind the scenes amongst the team buses when I ran into one of the greatest road sprinters of all time in Eric Zabel. A genuinely nice guy, he was happy to chat for a few minutes and to pose for a photo. Seeing him in a Columbia shirt, I asked what his role was with the team, expecting an answer such as VIP liaison or some other promotional role. However, I was surprised to learn that his primary function at Columbia is to arrive early and scope out the finish for the team’s sprinters.
In the past, sprinters like Renshaw and Cavendish would usually have relied on the race manual for most of their information regarding the stage. And their own previous experience and that of their team mates and director would all be considered if any of them had been to this finish town previously. The race manual is still an invaluable tool as it indicates everything the teams need to know, such as intermediate sprints, hills, mountains, feed zones etc. But it doesn’t indicate wind direction, road surface, whether the road slightly inclines or declines, road width etc…the little things that can change the way a sprint is run and hopefully won. 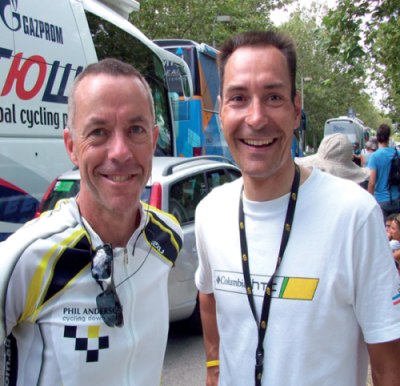 At Columbia it goes something like this…They still ingest the information contained in the manual and dis- cuss in detail possible scenarios and ideal situations to strive for and they draw on their collective experience to formulate a plan. They decide which riders will ride to bring back breaks and which riders will be saved to lead out Cav and at what point they will swing off. But then they bring out their not so secret, secret weapon, Mr Zabel. Winner of many sprint finishes over an illustrious career, Zabel will have been part of the pre stage discussion, but his revolutionary role at Columbia, sees him at the finish hours before the race arrives. He notes the specifics of the terrain on the approach to the finish, the wind direction, any unusual obstacles, road condition, road width, any hazards and any features that his riders may be able to use to advantage. In particular, the closing kilometre or so is closely checked. Roundabouts, gutters, barriers, road surface, gradient, camber, road width and corner tightness, are all noted as is the wind direction and severity.
He assesses how he expects all these factors to influence the sprint and comes up with a plan to ensure a Columbia rider is first across the line. He then phones the director in the team car, who via team radio informs the riders of what to expect and Zabel’s plan for how the sprint should be executed. Having checked out the run into La Grande Motte, Zabel explained to me how he had instructed the riders about the various obstacles and twists and turns, but in particular the importance of being first into the last corner, sprinting up the right hand gutter so that their opponents would have to pass in the wind, and the point where Mark Renshaw should swing off to leave Cavendish to charge for the line. Roll the tape. Zabel’s instructions were carried out to the letter and Cavendish crossed the line in triumph, as he managed to do an amazing six times in the 2009 TDF.
On a day plagued by crosswinds, the Columbia team chased down a break that had enjoyed a maximum advantage of over 12 minutes. Then with 30km to go, they split the peloton and drove home their advantage, gaining 40 seconds on the disorganised bunch who had no answer for the cohesive team effort of the Columbia train. The perfect Columbia day was iced in the last few hundred metres by the dominant sprint combination of Renshaw and Cavendish. Cavendish is without a doubt the leading sprinter in road racing, and Zabel freely expresses his belief (which is shared by many), that
Mark Renshaw is the best lead out man in the world. However, Zabel goes on to say that perhaps he is one of the best ever. High praise indeed. Personally, I can’t wait for next season to roll around, to see what the former riders, Peiper and Zabel and their protégées Renshaw and Cavendish have in store.