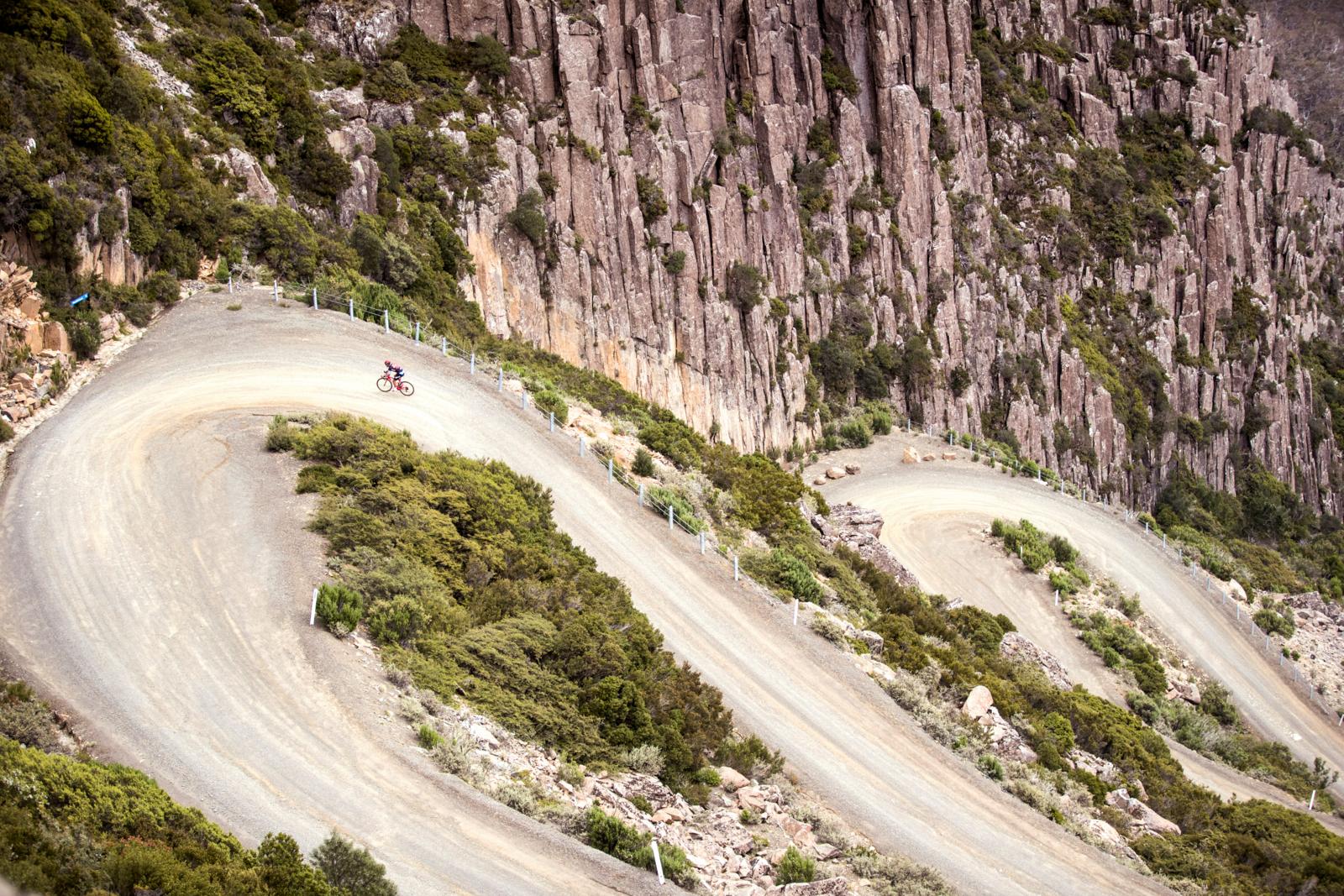 In part two of one of the most popular features of the past 12 months, we take a look at more of Australia’s best cycling climbs. First up, international cycling photographer Beardy McBeard focuses on one of his favourite Australian climbs: Jacobs Ladder in Ben Lomond National Park in Tasmania.

What is it about switchbacks that captivates us as cyclists? There are few examples of these majestic road formations in Australia, with thousands of Aussies heading abroad every year to get their fix of the twists and turns of tarmac laid out across the mountains of Europe.

With international borders locked tight due to COVID, I thought I’d focus on a place that serves up switchbacks equal to many iconic European passes, but with a distinctly Australian flavour.

From the moment I first laid eyes on Jacobs Ladder in the Ben Lomond National Park I knew I had to visit and experience this spectacular climb for myself.

Around 40km from Launceston is the turnoff and very modest signpost to the Ben Lomond National Park. The road immediately turns to gravel with a much more significant signpost stating “Road Subject to ice and snow June—September Jacobs Ladder includes steep hairpin sections of road.” At this point the unprepared must surely turn back!

At 15.5km with a 6.3% average gradient, the climb rates on the harder end of the spectrum if it were sealed, but as a gravel road the difficulty rating is doubled. It’s also an out-and-back, so you have the descent to contend with! Don’t let that deter you, as it is without a doubt a spectacle worth its weight in sweat—or frozen toes, depending on the season.

…With international borders locked tight due to COVID, I thought I’d focus on a place that serves up switchbacks equal to many iconic European passes…

For the first 4km of the climb, the road ascends steeply and double digit gradients are as common as the sound of tyres spinning on gravel as standing efforts are required to keep the pedals turning over. The forest of snow gums is dense and the road fairly straight.

Then relief as the gradient drops—and there is even a bit of descending to let the lactic acid dissipate. At 8km in it kicks back up, but this time the effort is rewarded with glimpses of the elevation gained via views out towards Mount Barrow. The higher you climb, the sparser the vegetation interspersed with scree slopes like dolerite glaciers flowing down the mountainside.

The jutting columns of dolerite shaped like massive stone organ-pipes mark the last turn before the ladder. It’s a wall of rock but somehow the road clings on precariously with only steel cable between you and the edge, like a pendulum crunching the heavy gravel from corner one to six all the way to the summit at 1400m.

At this point—if the weather is clear—the view opens up and the panoramic vista back on the switchbacks and the valley is breathtaking. The reward for a hard ride—don’t forget to get a photo at the top!

If you are thinking of tackling Jacobs Ladder, 28mm tyres would be the minimum—and pack a jacket and spare tubes food and two bottles! The weather in Tasmania is variable, so checking the forecast for Ben Lomond weather station is a must!

1 Check the local weather and pack for cool to cold conditions at the top.

2 Ensure your bike and particularly tyres are in good order—28mm tyres are recommended.

3 Ride to conditions and take caution on the descent.

Melbourne-based rider Coco-Louise Henry takes us on a journey to Mt Donna Buang in Victoria.

As far as mountains go, Mt Donna Buang in Victoria offers a beautiful variety of riding, opening with steep pitches and winding roads through the temperate rainforest for the first half of the climb before opening out to wider and gentler roads with occasional views of Warburton for the second. And if you decided to go hard early, a final small pinch towards the top where the viewing tower takes in Melbourne and surrounds might give you cause to regret it.

Located just out of Warburton in Victoria, Mt Donna Buang, or Donna as she’s colloquially known, is one of the closest and most readily available mountains for Melbournian cyclists to enjoy. Only an hour and a half drive from Melbourne CBD, Donna also offers a unique option for those without a car and with plenty of legs.

Catching the train to Lilydale, riders can ride the 40km gravel rail trail to the base of Donna for a nice warm-up. Be warned, though: the rail trail has a slight downhill on the way and a slight incline on the way back, so you may not want to empty the tank on the climb if you’re doing the out-and-up-and-back.

Mt Donna Buang is a rare treat. The first day I climbed Donna as a baby cyclist I did it with a friend, and when we finished the descent we turned around and did it again for the pure joy of it. That evening I saw Everesting founder Andy van Bergen and was talked into doing the first women’s mass Everesting that was taking place a few months later on the very same mountain.

Everesting (climbing 8848m of vertical without sleeping) is tough, but on a mountain as beautiful as this it’s made much more enjoyable. Everesting Donna demanded 8.5 repeats of the mountain and 276km of riding, which took me 19 and a half hours. It was a feat that astounded everyone who knew me, particularly the ex-partner who threw a temper tantrum when I came home and announced what I was planning.

Far from being a beast or a wimp, Mt Donna Buang rises to meet the occasion a rider presents. It’s the type of climb that is as hard as you make it; unlike other climbs that demand a certain amount of flesh as an entry fee, Donna can be your best friend or make you grovel for mercy.

The opening stages of Mt Donna Buang are residential, with driveways coming off that don’t present an issue on the way up, but are worth being aware of on the way back down. Suburbia quickly gives way to ancient towering forests of mountain ash, myrtle beech and tree ferns, making for a delightful ride filled with the sounds of the rainforest. Enjoy the steeper percentage, tighter turns and tree cover while you can, for soon the change will come.

The midway point of Donna flattens out at Cement Creek for a brief reprieve and presents a car park, a rainforest walk, and a tantalising choice: to go down the other side of Donna on the stunning gravel Acheron Way. Better as a climb, but still exceptional as a descent, this can either be an option for a loop or another ride entirely on its own.

Acheron Way slopes gently down Donna until it reaches the Acheron river, a gently bubbling guide that winds its way through the valley alongside the road. Those that have experienced the Giro Della Donna have likely ridden this treat of a route before.

Continuing up the mountain from the Cement Creek carpark the road opens up as does the gradient, and the rainforest gives way to a more common Australian forest. This is the second half of Donna, and the half that is regularly covered in snow come winter. If you’ve seen cyclists riding in the snow in Victoria then there’s a good chance it was here as Donna is the closest snowfield to Melbourne.

Beyond Cement Creek the scenery is less exciting but the road does offer a lower gradient so you have two choices. Take the opportunity to continue to spin and enjoy the respite, or knock it down a gear and get stuck in. While there is a bit of traffic on Donna, this is the place to be, as the roads are wide and open providing drivers plenty more room to pass than the lower reaches. Traffic reduces as you pass the Marysville turn off, which you can also take to create even more of a loop if you’re really feeling it.

Nearing the top the gradient kicks up rudely again and the road narrows as it prepares for the turnaround and carpark at the summit. For those who really want to punish themselves, the climb to the top of the 21-metre viewing platform is possible in cleats although ill-advised. If someone were to make off with your bike it’s a long way back down!

…Make a day of it and ride from Lilydale along the rail trail to the base of Mt Donna Buang—just make sure you take enough snacks or coins to buy some; it’s about 112km round…

The descent on Donna is much as expected, although knowing how to hop inopportune sticks is a bonus as the trees crowd in on the road and weather often changes the road conditions quickly. The top half of the descent is fast and flowy, with one friend once topping out over 80km an hour in an eye-watering kamikaze. There are a couple of corners to be aware of, namely coming into Cement Creek, but largely it’s an enjoyably smooth descent where you can see through most bends.

Cement Creek marks the beginning of the steeper, tighter descent where wildlife is a little more common and there are a few bumps in the tarmac. As far as descents go this one will get the adrenaline high enough to make you want to whoop—which I’m sure the neighbours won’t mind (or be surprised by). Coming into the residential area be aware, as many a rider has run afoul of a car pulling out, and with the tight turns it’s easy to overcook a corner if you need to swerve out of your descending line at speed.

Once at the bottom stopping in at Cog Bike Cafe on the rail trail is a must, and the phone reception is more than enough to upload photos and Strava files from the climb. Enjoy!

1 Make a day of it and ride from Lilydale along the rail trail to the base of Mt Donna Buang—just make sure you take enough snacks or coins to buy some; it’s about 112km round.

2 Settle into the flow of the bottom half of the descent—there aren’t many roads that tuck you in like this one.

3 You can top up your water bottle midway up the climb
at Cement Creek (well, at your own risk, but I do). 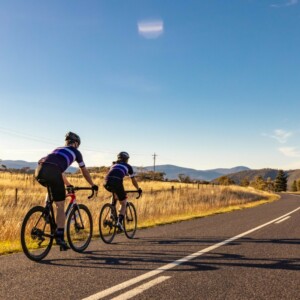 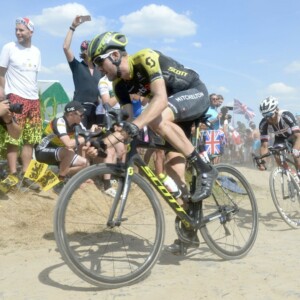