The 22-year-old Orica-Bike Exchange rider was awarded the win after Cofidis sprinter Nacer Bouhanni was disqualified for changing his line and hampering Ewan in the final sprint.

One of the most notable wins of Ewan’s career, the 250km classic included some of the world’s top talent including John Degenkolb, Andre Greipel, Alexander Kristoff and fellow Aussie Mark Renshaw – who placed 7th.

An elated Ewan said it was a fast and tough sprint.

“I had to deviate from my line a bit and it’s always difficult to try and regain momentum after that,” he said of Bouhanni’s move in the final seconds of the race.

“It’s great to get a European win under my belt for this season, it was an eventful day all round after suffering a puncture and then crashing twice although fortunately I landed on my feet both times.

“The whole team did a fantastic job in getting me back into the bunch after the crashes and they really were superb today.” Sport director Matt White praised the work of the team and Ewan in the one-day classic.

“The conditions were very difficult,” said White. “We had half of the team go down in the crash with 15km to go before Luke Durbridge and Michael Albasini did some incredible work to bring us back.”

“The finale was also chaotic and Luka Mezgec and Daryl Impey fought hard to drop Caleb (Ewan) off in great position to contest the sprint. Caleb is a deserved winner today, he did fantastically well to avoid the crash with 300metres to go and finished off the good work of the team brilliantly.

“Of course we are happy with the result, it’s the first win in Europe for Caleb this year after he started the season strongly in Australia. He was up against a top class field today and this win provides more valuable experience for him going into future races.” 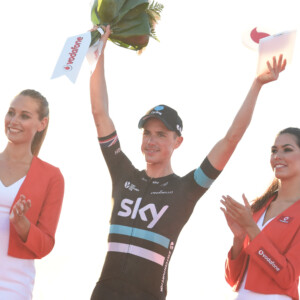