Search
Menu
Search
What can’t you say about Lance Armstrong? Cancer survivor, seven time Tour de France winner, and bestselling author. The man is so famous that he is simply known to most people by his first name. Associated Press has named him ‘Male Athlete of the Year’ no less than four times and Time Magazine nominated him as one of the 100 most influential people. He is on first name basis with several ex United States presidents, has dated a number of celebrity women but still manages to be ‘of the people.’
As he has said himself, if a Hollywood script writer penned his story, it would be thrown out as too fantastic. A young athlete, recently crowned World Champion is diagnosed with life threatening cancer. He is given a 20% chance of survival. He undergoes a savage course of chemotherapy and returns to the sport not only to win the greatest race in the world, but to win it a record seven times. It has to be one of the most wonderful stories of the twentieth century. So good that, his autobiography ‘It’s Not About the Bike’ went tonumber one on the New York Times bestseller list. With all this, seven Tour victories, which may never be beaten, a mansion in Texas, your own plane and a foundation to keep you occupied, why would you make a comeback? All the evidence points against its success. Look at Michael Jordan. Look at Tony Lockett. But Armstrong feels differently. He says the whole purpose of his comeback is to promote cancer awareness. 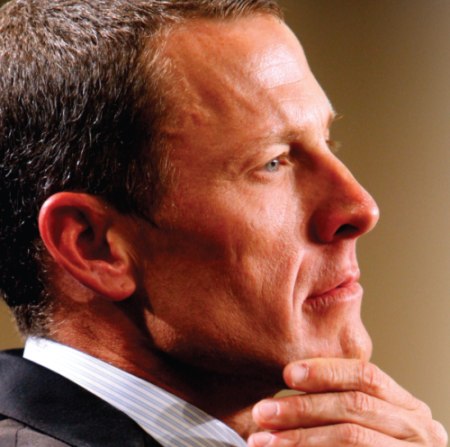 In an interview immediately after announcing the comeback he said “If you win an eighth Tour and have the Livestrong International Summit in Paris and nobody shows up and no commitments are made and we don’t effect change in terms of the global burden, then I’ve wasted everybody’s time. However, if you don’t do the Tour, or you do the Tour and you get fourth, and the summit is a smashing success and people participate, and world leaders make commitments that really go towards advancing this issue, then that’s a success.” Going through the pictures for this article, one thing really stands out and that is the look of determination in Lance’s eyes. Here is a man who knows what he is doing, is confident in his abilities and comfortable with his decision. Fortunately for us, Lance will begin his comeback at the Tour Down Under in Adelaide and the city is already buzzing. Cycling Australia report that an unprecedented number of international journalists and photographers have applied for accreditation to follow the Armstrong circus. Whichever way you look at it, this comeback beginning in Australia must raise the profile of the sport in this country. We caught up with Lance, just as he was getting into full training with long time coach and mentor, Chris Carmichael.
Lance Armstrong, thank you very much for your time.
Bicycling Australia: Let’s talk cancer first. You said that the main reason you wish to return to professional cycling is to promote cancer awareness throughout the world. Given that you are already one of, if not the most famous cancer survivor, how do you hope to improve on what you’ve already achieved?
Lance Armstrong: For approximately two years the LAF (Lance Armstrong Foundation) conducted a series of interviews and research around the world as it relates to cancer. The results were astounding. There is still a stigma in many places that cancer is contagious or that if you had it is an automatic death sentence. These stigmas and attitudes need to be corrected. That is the goal of the global mission.
BA: Do you know how much the Lance Armstrong Foundation has raised since its inception?
LA: Yep I sure do. To date the LAF has raised over US$260 million dollars.
BA: Can you tell us some of the results that you’ve seen as a direct result of your foundation?
LA: There have been many improvements since the inception of the Lance Armstrong Foundation. But I think the one that I am most proud of is the passing of Proposition 15 in Texas. Last year the voters of Texas went to the polls and passed a three billion dollar ballot initiative that will allow cutting edge cancer research to be conducted in Texas laboratories. This will ensure that proven discoveries are delivered to all segments of the population in local communities across the state. It was the success of Prop 15 that allowed us to focus our efforts across the USA and now hopefully on a global scale.
BA: Were there other reasons for your choice to make a comeback?
Such as unfinished business? Boredom? Any others?
LA: Nope. Nothing along those lines. I felt good on the mountain bike and felt like my body was still in good shape. I felt it was possible for me to do it, so I did. I wouldn’t be doing this if I didn’t think I couldn’t compete.
BA: Once the idea came into your head to ride professionally again, how long did you think it over before deciding, “Yes, I’ll do it!”?
LA: Well, I had a great result at a mountain bike race in Colorado called the Leadville 100 ( The Leadville 100 is an incredibly tough, 100 mile race in the Rocky Mountains. Lance finished second. Ed). I felt like I could compete but more importantly, I felt motivated to compete. After that race I discussed it with Kik (Lance’s former wife), and my three children. Once they gave the okay my mind was made up.

BA: You and Johan Bruyneel are quite close. He told me that at times when things were difficult you could discuss anything with him. What was his first reaction when you told him your plans?
LA: I think honestly he thought I was crazy and I was putting him on.
But after the initial reaction he could tell that I was motivated and ready for the challenge. If he wasn’t on board well, I am not sure I would be making a comeback.
BA: Have you spoken to Alberto Contador about what you’d like to achieve in 2009?
LA: As of today I have not but we will see each other in training camp in a few weeks in Tenerife.
BA: Historically, sporting comebacks have a high failure rate. One only has to look as far as someone like Michael Jordan. With that in mind, why did you choose cycling? You’re a good runner. You could have run marathons all over world or gone to the Kona Ironman. Why take the risk that should you not achieve what you’re setting out to do, that people may remember that more than your previous success?
LA: Running was fun and kept me in good shape. But in all honesty, it was not something that I woke up each morning and looked forward to. If I don’t win any races and the global mission is a success, then I will still be very pleased. And I haven’t ruled out having a go at Kona someday.
BA: Is the chance of failure something which frightens you?
LA: One thing about me is that I hate to lose. I think all folks who are successful at something have a fear of failure. It is what drives them.
BA: It’s possible that at first, you won’t have quite the same aura that you had during your Tour de France years. What are you expecting from the other riders in the peloton?
LA: To be honest, I’m not really sure what to expect and that is okay with me. Some riders have been very positive about it and some think I shouldn’t be there. What I do know is that I will be ready to compete when I line up at each and every race.
BA: You grew up in Plano, a small town in Texas. Now you are known around the world on a first name basis. How difficult has it been to adjust to that sort of fame?
LA: I am lucky in that I now live in Austin Texas. It’s a very mellow town and people are very nice and respectful.
BA: Why do you think it is that you are the rider who is constantly singled out in the press about drugs despite never returning a positive sample? A number of riders who won the Tour five times are never mentioned or chased after. Why just you?
LA: I think a lot of that has to do with the amount of media there are these days. Everyone with a computer and a cell phone is a journalist. Unfortunately in modern sport with success comes questions and speculation. I think that is just part of the world we live in. .
BA: And how do you deal with it time after time? It must be very frustrating?
LA: I’m able to deal with it because I see it is a part of the job. Critics like to pile on cycling because of the drug problem. But we do more than any other sport when it comes to testing. You look at other sports and the athletes know when their test is coming up. What is that all about? Since my comeback I have been tested randomly five times. No schedule, no appointments, just a knock on the door when I am reading the morning paper. I am accountable everyday of the year with regards to my whereabouts. Whether I am going to South Australia for a race or training in Mexico the authorities and control folks always know where I am.
BA: You came to Australia to race at the Olympic games in Sydney, but I don’t believe you have ever been to Adelaide? What expectations do you have of the Tour Down Under?
BA: Sadly, I have not been back to Australia since the Games. I have yet to make it to Adelaide but I cannot wait to get going. The response not only from a cycling standpoint but also with regards to the global cancer mission has been phenomenal.
BA: Australians are proud you are choosing to begin your comeback here. We are looking forward to it immensely. Are there any things you’d like to see while you’re in Australia?
LA: I plan to get to South Australia a bit early and see some of the country. Obviously there will be functions, press engagements and I will be on the bike most of the day. But I hope to get out and sample local culture.