Search
Menu
Search
What could bring 96 cyclists together from all corners of the globe and all walks of life? A great challenge, a special place and a worthwhile cause. Phil Latz went to Tasmania to absorb the atmosphere. 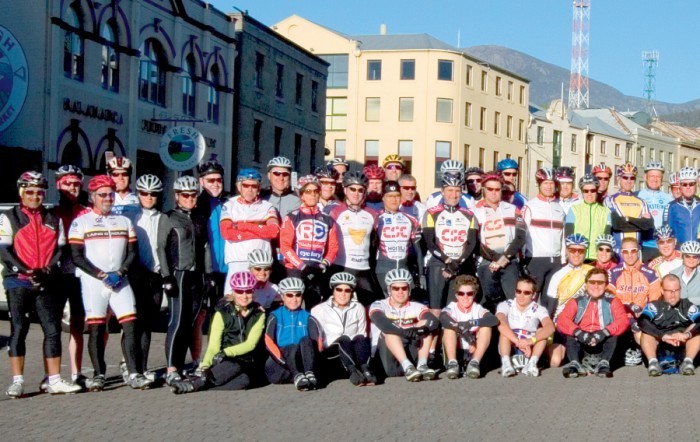 The Bicycling Australia Challenge has grown significantly over the past five years since 2001, when I created the event on behalf of Teen Challenge NSW, now known as One80TC.
Teen Challenge took over the running of ‘the Challenge’ after several years of close association with our organisation, and it is now run extremely professionally and smoothly, providing a platform for enthusiasts to enjoy the ride while helping out those in need. For many years Teen Challenge has run drug and alcohol rehabilitation programs mainly for young men and from day one the Bicycling Australia Challenge has been about much more than raising funds. Each year, TC students and graduates have been involved, sometimes as riders or support crew. Not only does this give them a big sense of achievement, it also gives everyone else on the ride a unique chance to interact with the students. Almost always, both groups come away feeling very positive about their experience.
Added Appeal

Bicycling Australia Challenge rides are very different from well known multi day rides. They have longer, more challenging stages, far smaller rider numbers, and a much higher (and more expensive) level of accommodation and logistical support. For those who participate, it is rather like riding in a professional race minus the pressure to perform! The 2006 ride in Tasmania, called the Tour de Freedom, was considered the best ever. Rides like this are all about personal challenges and shared experiences. One80TC CEO Rhett Morris is one of the key driving forces behind the Bicycling Australia Challenge who also takes part in the ride. “We’ve had 96 riders on the road, 75% male 25% female,” says Rhett, who has a background in triathlon. “Our youngest rider is 15 and our oldest is in his sixties, but he’s as tough as nails. The good thing is that a lot of the riders of similar standard. Riders choose from three bunches they want to ride. ‘A’, is the slowest and starts first, followed by B and C. “Our A riders usually average around 20km/h for the tour,” Rhett continues. “B usually average 30km/h and C average 35km/h. This is the first year that our fast bunch has not been able to crack 32km/h as an average, just because of the tough, hilly terrain. “The biggest group has been our A. We want people to feel comfortable. We don’t want them to string themselves out and blow up. People really want to ride in groups—it’s very social, which is nice. You’ll find people here who will make friendships for life.
Epic Stage
“This year’s course, in Tasmania, has been quite undulating. Day two was pretty incredible, from Launceston to St Helens, 166km. The distance wasn’t the issue; it was those three six and seven kilometre climbs. But the descents were fantastic and road conditions were good. “All our ‘road captains’ on the road are miked up (with two way radio) so the support vehicles behind can tell the riders when a vehicle is coming through. That way the riders feel safe, which is important.”
The Bicycling Australia Challenge moves around the country every year, and next year will be heading west. “Next year we’re off to Perth, and that will mean the Bicycling Australia Challenge has visited every State except the Northern Territory,” Rhett explains proudly.
For more information about the Bicycling Australia Challenge see, www.tcnsw.org/tdf/ 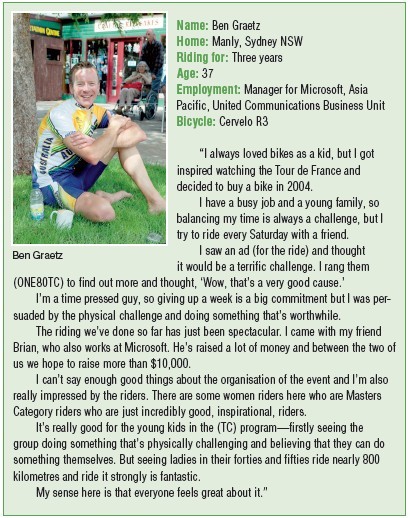