Search
Menu
Search
When the track season is underway many people are attending or taking part in races. Ian Melvin provides a comprehensive starter guide to the competition on ‘the boards’.
As the road races temporarily disappear from the event calendar and the mercury rises, it can only mean one thing, track season. Running from late October until early March, track racing offers competitors and spectators alike a mix of fast and exciting racing. Track racing takes place on a velodrome. These can be either wooden, concrete or asphalt based, and can vary from 200m to 500m in length. The shorter tracks are generally indoor velodromes, such as Sydney’s Dunc Gray, while the larger tracks are often outdoors, such as Brisbane’s Chandler Stadium.
Why track? 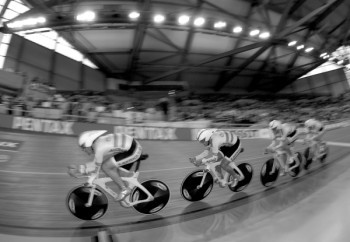 Track cycling offers a safe off-road and controlled environment for young riders to learn to race. Through their development, riders will learn first basic and then advanced bike handling skills as they compete on the boards. Young riders learn to pedal at a high cadence, saving energy for when it is needed later in a race. As track cycling is generally a faster sport, riders learn to think fast and become tactically more aware. It’s no coincidence that for the past 10 years or more, the majority of Australia’s leading road professionals, both male and female, have all had a strong background in track racing. They have learned their skills and craft on a velodrome before developing into world class road professionals. Some elite road riders will in fact often return to track racing outside of the road season such as Robbie McEwen, treating the competition as training.
The Bikes
Track bikes are far simpler than road bikes, something that is reflected in the price. There are no brakes and just a single fixed gear. Riding ‘fixed’ develops a fast leg speed and superior pedalling fluidity. Lance Armstrong was known to spend a period of his off-season each year riding a fixed gear bike for this very reason. The cranks used on a track bike are generally shorter than those on a road bike. Sprinters will traditionally use 165mm cranks while endurance riders may use up to 170mm cranks for some events. Road bike cranks can vary from 170mm to 180mm and beyond.
Gearing is adjusted by changing the front chain ring and/or the rear sprocket. The wheels can often be very similar to those used on the road, although most track wheels will have large flange hubs and many sprinters will actually tie and solder the spokes of their wheels together for greater strength.
Tyres used will often be singles, otherwise known as ‘tubs’, which are one piece tyres glued to the rims and inflated to pressures up to and around 200 psi. These are lighter than standard tyres and those made specifically for a velodrome are done so using a combination of cotton and silk. Road singles are made with just cotton.
The Races
Track offers a host of different events, some easy to follow and others a little more complicated for the novice or unaware spectator. The events, however, can be broken down into either Sprint or Endurance events.
Sprint 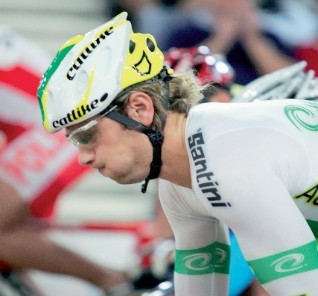 These races can be split in to two distinct events, the match sprint and the Olympic sprint. In the match sprint, two riders will go head to head, battling each other over a total distance of three laps of the velodrome. The early laps are traditionally a game of cat and mouse where the riders attempt to outsmart and out manoeuvre their opponent. It is often not until the final 200m that the riders get to full speed, tussling with one another all the way to line at a breathtakingly fast speed. Great for spectators, but nerves of steel are required to be a real match sprinter.
In the Olympic sprint, teams of three riders line up on opposite sides of the track. When the race begins, each team has to complete three laps of the velodrome as fast as possible with each rider taking their turn to ride at the front for one lap. After they have ridden their lap, the rider swings towards the top of the track, leaving their team-mates to continue.
Keirin
This is another sprint race with up to eight riders competing at any one time. A motorbike or Keirin (often called a Derny) paces the riders at the start, gradually building its speed until the riders are at race pace. With just one-and-a-half laps of the race remaining, the bike pulls off the track leaving the riders behind to battle it out over the closing stages to cross the line first.
Time Trial
There are two distances for the time trial event. Men compete over 1km while the women race over 500m. Riders start individually from a starting gate or a hand held start. Slow starts or mechanical problems can cost riders dearly in this race as winning margins can often be as little as less than one second. The time trial is an ultimate test of a sprinter’s ability and their mental toughness. 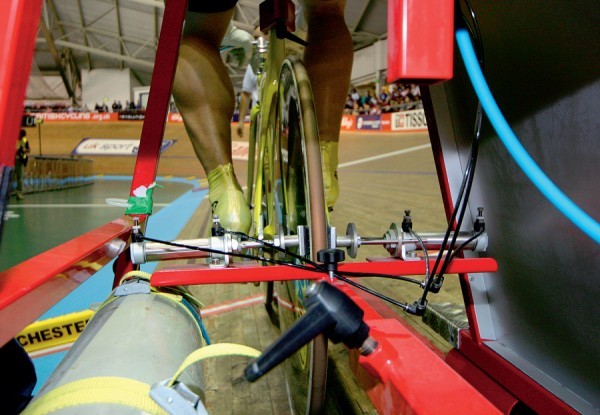 Pursuit
The individual and team pursuit races are often the blue ribbon events of the endurance races on a velodrome. In the individual pursuit, riders are pitted against each other from opposite sides of the track, racing to cover a distance between 2km to 4km depending on age and gender. In the team event, the same applies as riders take it in turn to lead their team mates for a lap before swinging off the front to move to the back of their team to recover until it is their turn to set the pace again. The time for a time pursuit is taken on the third rider to cross the line; this ensures that the riders have to stick together, working to cover the distance. Distances for the team pursuit are either 3km or 4km, again dependent upon age. Until this year the team pursuit has only ever been competed by males. In 2007, this event is being introduced for women, a move that has excited many people.
Scratch Race
This is as close as you will find to a road race on a velodrome. The winner is quite literally the first over the line at the end of the total distance, often up to 15km. Exceptions can be made when a rider has lapped the rest of the field. In this instance, even if another rider beats them in the final sprint, as they are a lap in front they will emerge the race winner. Team tactics will often come to the fore in such events with riders blocking or sacrificing their own chances in support of a team-mate.
Points Race
Covering a similar distance to the scratch race, the point’s race is broken up by a series of sprints evenly spaced throughout the event. The first 5 competitors across the line at a sprint accumulate points. The winner is the rider that runs out with the greatest number of points at the end of the race. That said, just like the scratch race, if a rider takes a lap that puts them ahead of other competitors, irrespective of points scored.
Madison 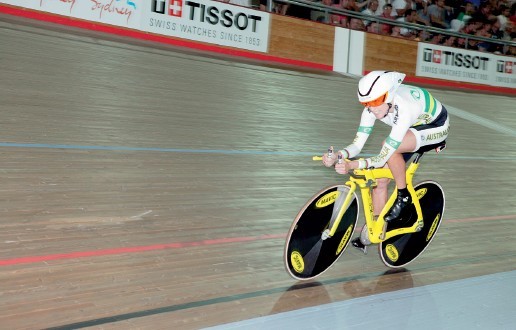 For somebody not involved in track cycling, the Madison event can look to be the most confusing of all track events. First raced in 1899 at Madison Square Garden in New York, (hence the name), the Madison or ‘Américaine’, pits teams of two riders against one another. After a mass start, only one rider is allowed in the race at any one time. While one rider hovers around the outside of the track at a slow pace, recovering from their efforts, their team mate is in the thick of the action competing for points made available at evenly spaced sprints in the race.
Riders swap over through a ‘hand-sling’ where the rider leaving the race uses their momentum to throw their team-mate into the action. It can make for a fast, exciting and sometimes hair-raising spectacle. The winner is the team that has accumulated the greatest number of points at the end of the race after laps taken have been considered.
Events
Throughout the track season, Australia hosts some excellent racing around the country. Anyone interested in cycling should take the time to go along to their local velodrome to watch the competition during the summer or even better, get involved by contacting your local club and find out how to get started.