Chris Froome gained more than two precious minutes on race leader Nairo Quintana in the all-impotent Individual Time Trial at la Vuelta in Spain last night.
Starting the race against the clock more than 3-minutes down on the Colombian, Froome is now just 1:21 behind as the riders go into tonight’s final mountain stage.

Setting the fastest pace of the day, Froome completed the 37km ITT in 46 minutes and 33 seconds – more than 40-seconds quicker than second-placed Jonathan Castroviejo of team Movistar.

“I gave the time trial everything I had. I don’t think there’s much more I could have done today. I left it all out on the road,” said Froome after the stage.

“It’s my last race of the year and I’m happy to still be in good condition.”
“There’s still one more really tough day of racing tomorrow. Of course Quintana still has more than one minute of an advantage. We’re going to keep fighting all the way.
“We’ll see (what happens) tomorrow and I’ll speak with my team-mates tonight. Quintana with Movistar has a really good team around him and it’s going to be difficult to beat him.”

Onboard Camera Highlights From The ITT

Orica-Bike Exchange’s Esteban Chaves and Simon Yates both lost time in the event with Chaves now 4th overall and Yates back to 6th.

Alberto Contador was the big winner in the ITT. Far more suited to the discipline than Chaves, Contador finished 8th on the day to move to 3rd overall on General Classification.

Acknowledging his time trial went well, Contador said he knew he could make a difference on Chaves.

“It became tougher and I had a hard time keeping a steady pace of watts, it was stop and go,” he said. “I didn’t feel the way I would have liked, the effort took its toll but I’m satisfied with the result.”

Alberto Contador said it was a shame things went wrong for him earlier in the Vuelta.

“Because of my crash and other factors, I currently am not facing the best possible scenario,” he said.

“I would have liked to be fighting for another goal, but after all, we can’t complain. Froome did an extraordinary race today. Maybe they still have options, but they will, obviously, have to make a move tomorrow. It will be all or nothing for them and we’ll see whether we can take advantage of that. I will try something on the Alto de Aitana.”

Final Showdown In The Mountains

Tonight’s penultimate stage covers a 193.2km route including five classified climbs, and an arduous 21km ascent of the Alto de Aitana before riders cross the finish line. It’s sure to be the most thrilling stage of this year’s race as the top four riders – the four best climbers on the planet – vie for final podium positions. 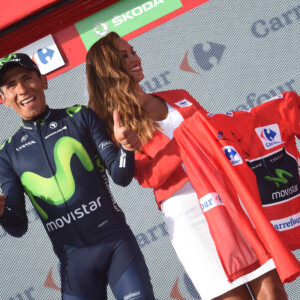