Miles Scotson is the nation’s 2017 Road Champion after a blistering attack in the final minutes of the Road Nationals at Mt Buninyong in Victoria.

In a race dictated by a breakaway filled with big-name riders, it wasn’t till the closing kilometres that the fireworks really began. Potential winners including Brendan Canty, Jay McCarthy, Nathan Haas and Lachlan Morton were shoulder to shoulder within the closing 2km of the 183km race. With Luke Durbridge and Simon Gerrans also in the mix, it appeared to many Gerro might be destined for the win.

With 1.8km to go commentators Matthew Keenan and Phil Liggett made the observation Scotson had dropped back and was looking particularly suspicious behind the lead group. Within moments the 22yo made the most decisive move of the race. Screaming past the group, he successfully carried his brazen attack to the line.

With a disappointed Gerro sprinting for 2nd and Nathan Haas finishing 3rd, an ecstatic Scotson described the win as a fairytale.

“No way did I think I’d get around 18 laps today with the training load I’d done,” he said after his most significant win to date.

“There was no pressure. I wanted to have a crack and enjoy it. I asked the mechanic to put on a 54 chain ring and stuck with that tactic!”

A former U23 national champion, 2017 will be a huge year for Scotson who’s signed with BMC Racing and will ride the WorldTour alongside compatriots Richie Porte and Rohan Dennis.

“I just can’t wait for this season,” Scotson told SBS Cycling after the big win. “I think I’ve got more, I’m going to enjoy it,”

So will we Miles! So will we. 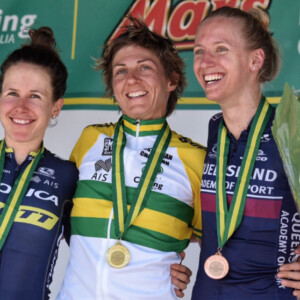