Search
Menu
Search
Is there anything better than the smell of freshly baked bread? And with so many varieties including low GI, iron enriched and even one that contains calcium, surely it is a healthy choice for active people? Unfortunately, I beg to differ.
Bread has been a dietary staple for thousands of years, and the more advanced technology has become, so too the more processed our bread, resulting in the soft, almost sticky common white loaf many families base a number of meals around each day. Bread, white or otherwise is a rich source of B group vitamins, which are crucial for energy production, and hence bread remains a major contributor to energy and the running of energy systems in the body.
Less processed varieties of bread also offer a range of other nutrients including dietary fibre, Vitamin E, zinc; iron and long chain unsaturated fats. This is generally why loaves of grain based bread contain more fat than white bread. Apart from the distinct nutrient differences between white and grain based breads, the other major and most significant difference from a health perspective is the difference in glycaemic index between breads. As white, wholemeal and flat breads have all had the grains ground down in their processing, they have a relatively high GI compared to wholegrain bread, meaning that they release glucose into the bloodstream much more quickly than wholegrain breads.
Over time, this means that choosing processed breads as a dietary staple will be resulting in regular glucose peaks and troughs, and subsequent insulin release. High insulin levels over time are related to weight gain and increased risk of developing Type 2 diabetes. 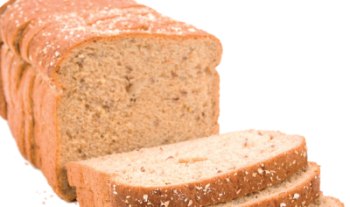 Yes, it is true that athletes, particularly elite level athletes can make good use of high GI foods. During events, long rides or as a recovery snack, there is evidence to show that high GI foods including white bread can be used very effectively to restore muscle glycogen levels more quickly than carbohydrate foods with a lower GI. On the whole though, even athletes are better to base their diets around grain based breads and cereals for the range of other health benefits that they offer.
Generally speaking, the more grains the bread has, the better it will be for you, with soy and linseed loaves a standout due to their high polyunsaturated fat content thanks to the presence of linseeds. Polyunsaturated fats have been shown to have a number of health benefits long term, including reducing inflammation in the body. While wholemeal bread does contain more dietary fibre than standard white bread, it is still a high GI choice and Turkish is perhaps the worse bread of all, with its mixture of large serving sizes, holes that readily get filled with butter or margarine and large amounts of white flour, giving it its high GI and carbohydrate load. Another popular choice, sourdough does have a lower GI than regular white bread, but keep in mind that the serving sizes of sourdough also tend to be large which may be contributing to a kilojoule overload if you are trying to lose body fat.
The average adult will need just two to four slices of bread each day and be mindful of the increasing sizes. Some large, thick slices of bread can contain up to double the amount of carbohydrates and are really not necessary for the majority of us who would ultimately like to drop a few extra kilograms.