As a keen road cyclist Julia Van Der Veer was exciting to be pregnant but sad to know the four bunch rides she was riding each week would soon be curtailed – especially with twins on board.

But after speaking with her obstetrician along with reading up on the subject, Julia kept pedaling right up to 3-days before the birth of Vincent and Ariya last Friday.

“My husband and I took up cycling at the end of 2014 and from then on, we became hooked and so did the need for bike upgrades,” Julia told Bicycling Australia.

“We found a local group called MC cyclery and through their support, went from riding as a duo to joining their weekly Tuesday, Thursday, Saturday and Sunday longer rides.”

On finding out she was pregnant Julia said she wanted to continue cycling despite knowing that it would eventually come to an end. Despite being 5-weeks pregnant she completed this year’s 110km Blayney to Bathurst ride and continued riding throughout a nauseous first semester.

“The advice from the obstetrician was to continue doing what I was doing until the body said otherwise,” she said.
“I am not sure how literally he thinks I took that!” she added.

“It was not until a baby brain moment at 15 weeks whilst on holidays in Japan did I realize the risks of still being out on the road,” she said.

“Thinking I was clipped in on a rental commuter bike, the kickstand caught the kerb and I fell over knocking myself unconscious. After an ambulance trip to hospital and scaring the hell out of my husband, I was cleaned up of grazes, a minor concussion and the relief that the twins were alright.”

Upon returning home Julia became anxious of being on the road and considered her options. Her solution – move the bike onto a smart trainer and continue riding via the competitive virtual training platform Zwift.

“It was great to continue cycling on my bike without the fear of being knocked over or having a baby brain moment,” said Julia.

“My husband still continued with bunch riding and I got up with him – but instead walked into the other room to cycle … and kept up 30km rides, 4 days each week.”

I am so grateful to have continued cycling throughout the pregnancy,

The bunch were continually amazed with not only her Strava updates but the fact she was still riding while rapidly increasing in size.

“Luckily the Rapha bibs stretched as I grew,” Julia said with a laugh.

“At 30 weeks I changed to flatter Zwift courses and pushed aside my competitiveness to ignore the PRs. It did get harder to rest my hands on the handlebars over two heads in the belly and I did have to have start incorporating bladder breaks. The only change to the bike was the addition of a phone book under the front wheel block to give some relief on the reach.”

“I am so grateful to have continued cycling throughout the pregnancy,” she said.

“I hope that the twins can find the sound of the trainer soothing after hearing it from inside the belly. We even took into consideration the placement of the trainer within the nursery. We clearly have priorities in order!”

Do you have an inspirational cycling story that will help motivate and encourage others? We’d love to hear from you! Email nat@bicyclingaustralia.com 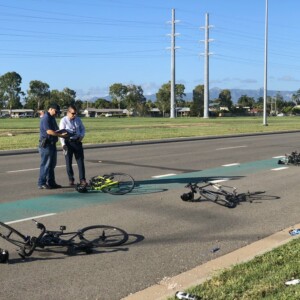