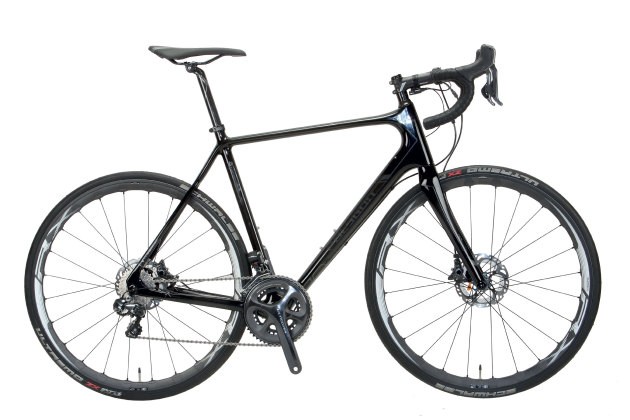 Polygon bikes have a retail premises in Sydney where you can touch and feel and buy a bike, but also the store’s website Australia wide there is a broad range of different bikes to choose from.

Reviewed here is the Polygon Helios C8X Disc; a full carbon, Shimano Ultegra Di2 disc brake road bike. With a suggested price of $4,599 yet available at the time of writing for $3,799rrp.

Comparing bikes just on the components attached to the frame is a dangerous game as there many more things to consider. But with a saving of around $1200 – $2000 over some brands with comparable spec the Helios seems impressive.

Being the endurance bike in the range, the C8X has a taller headtube, a slightly lower bottom bracket and longer wheelbase than the race styled bikes in the range. This is designed to allow the bike to be ridden for longer and to increase the stability of the bike at speed. A nice touch if you like to, or are thinking about riding the ever increasing number of Grand Fondo style events or charity rides out there.

Standing back looking at the C8X the first thing that you notice is that this is a slick looking bike, aided by the minimal approach to decals on the full carbon frame. A closer look reveals there are a few, but they are all matt grey or matt black and are nicely understated. This is something different compared to the norm these days, with many bikes being covered in every acronym known to man, in several different contrasting colours. If you like black bikes, this one could be for you. The external finish on the frame is attractive with the top layer of clear coat looking thick and smooth, with the raw carbon showing through in the sunlight.

Initial setup of the bike to my size required removing headset spacers and the top cap to swap them around revealed some rough edges inside the headtube and the downtube area. Removing some of the cable stops also revealed a few rough moulding edges. These areas of a bike are not seen by anyone but local bike shop or home mechanics, so while some pedantic reviews may be concerned that the inside of their frame doesnt look like the out, it’s really a matter of pragmatism that enables very competitive pricing. And it won’t stop you from enjoying the ride, or kicking your mate’s butt on the next climb.

The hydraulic brake lines run externally on the frame and fork and are held in place by some screws which aesthetically look slightly larger than need be, and which do stand out on the otherwise neat frame. Several comparable frames are coming with internally run brake cables these days, and while the external routing might make the mechanic at the local bike store happy, it’s a slight detractor visually. The hidden battery in the seatpost is a nice touch and makes for a cleaner looking bike.

Coming equipped with a full Ultegra Di2 groupset— including the small things that are sometimes overlooked such as the chain and cassette, is a nice surprise and the addition of the Shimano WH-RX830 wheelset is a good match. These wheels are carbon/alloy mix and tubeless compatible. They tipped the scales at just under 1,900g. Again a thoughtful inclusion for those looking to get some gran fondo or dirt road under their wheels.

The Shimano hubs are regular quick release, whereas many brands are opting for wind up axles these days especially when fitting disc brakes. Having said that the Polygon has a system at the dropouts both front and back that works with a fully encased locknut on the skewer which acts like a bolt-through axle. This gives you peace of mind when braking hard on steep descents yet it’s still quite easy to use for wheel removal.

With the Ultegra crankset running compact gearing and an 11-28 cassette on the rear wheel, climbing the Polygon is a no brainer with the steepest pinches handled from the house branded Entity Flux saddle. First impression of the saddle was that it might be too long and narrow for my liking but after spending a few weeks with the bike it stayed beneath me for the entire test and was quickly forgotten. A good thing, as you should only think of how your saddle feels if somebody asks you about it. The carbon Entity Elite bars fitted to the large (56cm) bike on the other hand didn’t fit in so well. Measuring at 42cm across the drops but only 40cm at the hoods, they felt narrow and the slight rearward sweep across the tops pulled my wrists into a slightly uncomfortable position. I would rather a more traditional shaped bar measuring 42 at the hoods for a bike of this size. If you find the bars are not to your liking you’ll need ot make an aftermarket purchase as switching parts during the sale process is not an option. But remembering how much less expensive this bike is compared to some other brands with the same groupset attached, if needed, a new set of bars shouldn’t worry the budget too much.

With the endurance bike category in my head, I went in search of some longer, rougher country style roads to get an idea of the all-day comfort of the C8X. Compliance through the seat stays is reasonable, with but the buzz taken out but with the feeling of the road still there. The bottom bracket is securely mounted and felt stiff, transferring power well. The feeling through the front end is smooth with the vibrations taken out but a little vague feeling on faster descents. Changing line mid corner to avoid a pothole or stick is always slightly more difficult on an endurance style bike with a slacker head angle, but the trade-off is the stability especially over rougher roads. The Helios always felt stable at high speed with the Schwalbe Ultremo ZX tyres holding a line nicely. Braking late into corners was something that I wanted to keep doing, and with the combination of the sticky ZX tyres and the 160mm brake rotors there was never an issue stopping. Given the UCI allowing disc brakes to be raced by the pros in 2016 this could be the style of bike that quickly becomes normal. Head down to your local bunch ride on Saturday morning and you will notice disc brakes are emerging already.

Noise or fade during the test was not a problem. It is great to see 700x25c tyres fitted as standard on this style of bike. Running slightly lower pressures around 90psi increased the comfort and the grip levels making the longer rides all the more enjoyable.

On rougher roads, the brake hose did rattle sometimes against the downtube. Some small pieces of rubber in the hose clamps would keep things tight and quiet. At the rear caliper, the hose is run on the outside of the frame where my heel did touch it sometimes, especially when out of the saddle climbing. It’d be a small job to swap it to the inside of the chainstay, also this would look better at the café. An afternoon spent tidying up these small things would make the C8X a neater, happier bike to live with.

Overall, this is a great value bike for those wanting a Di2 equipped all day bike that won’t offend you with its looks or manners. A solid, stable platform that with a few personal changes could become happy rolling in the bunch or ticking off the k’s along the Great Ocean Road. Rough roads won’t stop the fun and neither will some gravel.

SUMMING UP
QUALITY
The quality of the exterior finish on the Polygon is very good. Graphics are well thought out and classy. The spec of the bike will win it friends with the endurance crowd and any upgrades needed are personal touches only.

PERFORMANCE
Shimano discs, Di2 and tubeless ready wheels provide solid performance on the component front. The Helios’ upright geometry will let you ride longer than their ‘race’ models, but while it’s not the most compliant endurance frame, it does take the sting out of rough roads and the stiffness will let you extract decent speed and handling.

VALUE
It is hard to ignore the value that Polygon have managed to pack into this bike. Achieving optimum setup of the bike for your size and style may add a small charge for some buyers if professional help is needed, but the overall cost and outcome should still be very good.

OVERALL
The Helios is well worth a look if a name on a downtube isn’t the most important thing for you, as the spec and performance is higher than expected for a bike of this price. With a 14 day money back trial you will have something to fall back on if the bike doesn’t fit your mould. 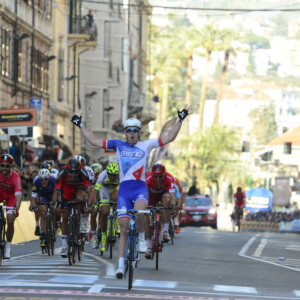